Everything You Need To Know About ‘Canada’s Drag Race’

So, FYI, we’re getting a Canadian edition of RuPaul’s Drag Race, and the cast reveal just dropped. Ofc, while there’s a wonderful mix of pageant, camp, beauty and comedy queens and lip sync performers, we can safely say that they seem a lot nicer than the usual U.S. cast, and still as lovably cooky.

Now, all we need is a trailer for Drag Race Australia and we’re set.

Here’s everything you need to know about the cast of Rupaul’s new drag phenomenon, Canada’s Drag Race.

Who Are The Hosts Of Canada’s Drag Race

The hosts and judges of Canada’s Drag Race each bring something exciting to the table, touching on all of the different aspects and challenges of RuPaul’s Drag Race. 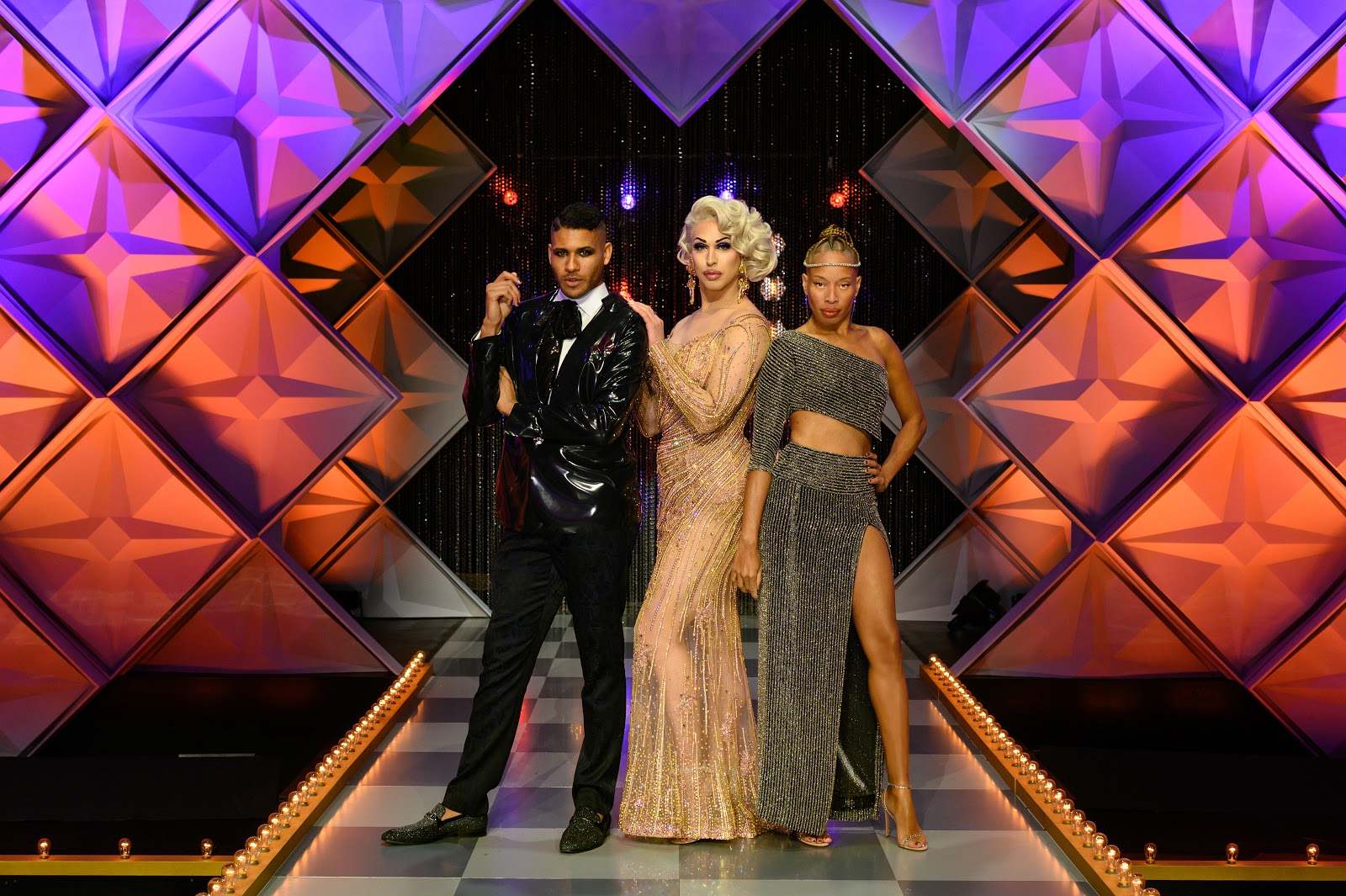 Instead of being hosted by RuPaul “fracking” Charles, Michelle Visage and co, Canadian Drag Race is helmed by the Drag Queen of the North from RuPaul’s Drag Race season 11, Brooke-Lynn Heights.

While it does feel a bit weird for a spin-off to a competition show to be hosted by someone who came second in their own season, you can’t deny Brooke-Lynn Heights’ talent and that she’s the right person for the job if RuPaul won’t host. She’s been through the reality competition before, knows what it’s like and what’s expected and is a choreographer and performer, perfect for judging dance challenges and lip syncs for your life.

Side note: Courtney Act needs to be the host of Drag Race Australia, even if she has a rocky relationship with RuPaul and Michelle Visage.

Anyway, in the behind the scenes pics below, it looks like BLH will present as a boy in the workroom just like RuPaul before donning the wigs, makeup and gowns and looking flawless. And, ngl, I forgot just how pretty he was out of drag and how stylish his fits are.

Unreal star Jeffrey Bowyer-Chapman will be Brooke-Lynn Heights’ right hand man, assumedly filling in the shoes of Ross Matthews and Carson Kressley and help judge any comedy and acting challenges.

FYI, he was also a guest judge in RuPaul’s All Stars 3 as one of the bachelors in the Bitchelor challenge, and is incredibly cute. Srsly, his smile is beautiful.

Stacey McKenzie is a Canadian fashion model and judge of Canada’s Next Top Model, the Canadian edition of the show RuPaul’s Drag Race was originally a parody of.

So, basically, she’s the Michelle Visage of Canada’s Drag Race and will bring the fashionista critique to the runway.

“Canada’s got it going on,” she said in a Stan press release about the show. “We’re a sleeping beauty, and we’re waking up. Everybody is going to be like, ‘oh shit, you’re here!’”

“We’re the quiet storm. I can’t wait for the world to see the next Drag Race. It’s unapologetically Canadian.”

The Queens Of Canada’s Drag Race

Priyanka is a Toronto based queen that prides herself on being Canada’s PoC queen. And, from her Meet the Queen segment, she’s funny, a total performer and someone who isn’t afraid to bring the drama and playful shade.

“I wanted queer PoCs to have somebody in the community who’s really repping their culture,” Priyanka says, explaining the meaning behind her name in the Meet The Queens video. “When I was going out before I was a drag queen, it was hard being the only PoC at the bar. People don’t treat you the same and I don’t want to stand for it anymore.”

BOA (Bitch On Arrival) seems like the total goofball and comedy queen of the season. Where everyone else took the theme “Queen of the North” quite literally and dressed like royalty, BOA donned a embezzled hockey fit with a hockey tee, gold glittery helmet and hockey stick and bubblegum pink ponytail.

As she says, “you’re not gonna get the same cute dress and a heel” with her. She’s out of the box and if she won, her family would finally start talking to her and she’d have some friends (she said it, not us!).

Jimbo is a queen from Victoria, British Columbia, is “from outta space,” sews her own outfits and, to me, seems like the cast’s biggest competition. A fashion designer at heart, she’s designed a plethora of face masks to protect yourself from Covid-19, and has a meticulously high fashion clown couture aesthetic that I love. Although her little bit about being a child on RuPaul’s shoulders in the MTQ vid was weird.

Jimbo kinda reminds me of Devina DeCampo if she had a one woman Las Vegas show. Ridiculous energy combined with bombastic and extravagant camp looks. And, from her MTQ, I get the impression she has a bit of that same Seattle campy weirdness that makes Jynx and Ben DeLa Creme so lovable and quirky.

Either way, idk about you but these fits screams “winner, winner, chicken boutaine dinner” to me.

Another Toronto queen, Juice Boxx seems like a total sweetheart. She describes herself as a “tiny chihuahua who’s always constantly shaking” from nerves, and that’s a big mood.

Kiara is a 21-year-old Montreal fashion queen. She draws inspo from fashion mags, divas of the past and anyone who stands out in fashion.

Anastarzia Anaquway is a pagent queen from East York, Ontario. Given her pageant experience, she’s a very competitive person. As she puts it, she’s always competing and here for the sewing and design challenges.

Honestly, there’s not much to say about her right now given that most of her Instagram features her out of drag. Hopefully, that might mean she could secretly be a really good lip sync performer.

Rita Baga is a “quiet killer,” who plans to destroy her competition one by one… kindly, the Canadian way.

As she says in her MTQ, she’s hosted drag competitions for 13 years but this is her first time actually competing. And judging from her photos below she’s a huge threat to everyone else.

Kyne is a drag queen beauty YouTuber with over 100k subscribers. She can play the flute like Lizzo, sew and make costumes from scratch, and has some pretty creative and versatile looks with her makeup.

Lemon is a professional dancer who’s done drag for the least amount of time in the cast but still looks incredibly polished. As she puts it, she thought dancing was what she was supposed to be doing but, “when I put myself in a wig and heels I was like, ‘ooh, that’s what I’m supposed to be doing.”

Scarlet Bobo is a Toronto drag queen and total performer who went to circus school. She’s been doing drag for 13 years, does drag shows seven nights a week and feels like she’s completely versatile.

Idk about you but if she starts doing flips and tricks during a lip sync I will gay scream. She’s like if Laila McQueen, Aja and Crystal Methyd had a baby, and I’m extremely here for it.

Okay so, first of all, what a name, combining Tyra Banks with her greatest “enemy,” Naomi Campbell.

Tynomi Banks reigns from Toronto and claims that when she walked in, people said, “I knew it, I knew you’d be here.”

And, from her Instagram she not only looks poised but serves some absolute looks.

Illona Verley is an Indigenous Canadian drag queen from Vancouver who is non-binary. As they mentions in MTQ, they are Two Spirited, a form of gender identity found in Indigenous culture that refers to someone who identifies as having traits that are both masculine and female.

For them, they identify as having a feminine brain and a masculine body. Doing drag helps give a physical face to their identity, and we most certainly have no choice but to stan.

Who Do We Want To Guest Judge Canada’s Drag Race?

In my eyes, Carly Rae Jepsen deserves her own Rusical but I know she’s too niche for that to happen. So, I’d be happy for her to judge a performance challenge and have the girls lip sync to one of her songs, maybe, oh, idk, “Run Away With Me” or “I Didn’t Just Come Here To Dance.” We need a CRJ redemption after “Cut To The Feeling…”

Schitt’s Creek’s queer icon Dan Levy is a must. Not only is Schitt’s Creek one of the biggest things to come out of Canada in recent years but he’s a comedian and would bring some fun playful energy to the judging panel. And we already had his fictional husband and Drag Race superfan Dustin Milligan in RuPaul’s Secret Celebrity Drag Race, so why not?

Personal pick is getting him for Snatch Game.

Another iconic musician to add to the judging panel. I mean, look, all I’m asking here is for a lip sync to “You Oughta Know” or “Uninvited.”

I mean, do I have to explain this? If you’re producing a Canadian edition of RuPaul’s Drag Race, Catherine O’Hara should be a given, either for a roast or at the very least, someone needs to do her for Snatch Game.

Ngl, Killing Eve’s Sandra Oh needs to be a judge on Canada’s Drag Race (if they have the budget, lol). Again, would be great for comedy, acting or Snatch Game.

Ellen Page is another absolute to me. She’s one of the most prolific LGBTQIA+ actors to come out of the country and hosted Gaycation, a documentary series about queer communities around the world. Another perfect judge for Snatch Game, imo.

Jason Wu is a Taiwanese-born fashion designer who grew up in Vancouver, Canada. Perfect for a design challenge or ball tbh.

Canada’s Drag Race will premiere on Stan on 3rd of July. RuPaul’s Drag Race All Stars 5 was also recently announced and coming on the 6th of June. You can watch the full Meet The Queens video below.